As it has become somewhat of a trend lately, the first challenge while writing a new post is to decide whether to write in Gujarati or English. Heart says Gujarati emanating from overflowing love for mother tongue, mind says English for the fact that it will be read by far more. I am starting with two humble goals. First goal is to bring this very beautiful personality from the 19th century to everyone's attention And second is to....well you will have to read it all the way to the end for it. 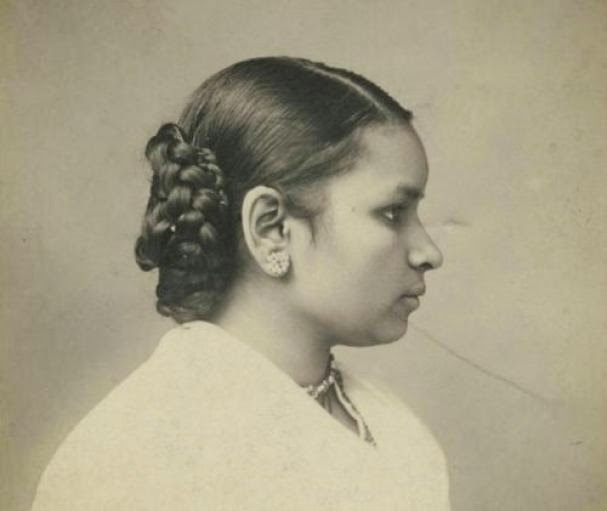 A good friend had gifted a small book, probably a 30 odd pages, titled "Hindu Women",  a compilation of names and some basic details of iconic and celebrated Hindu women through out the history such as Apala, Panna Dhai, Meerabai, Jijabai, Rani Laksmibai, Ahlyabai Holkar, Kalpna Chawla etc. The book lay untouched for more than a year collecting dust. Randomly while searching for a different book, stumbled upon this book and started flipping through the pages. And the brain says, yea yea, I have heard all these names, what's new? Then suddenly I saw this name which did not ring any bells. Did I read this name in our history book in grade 6? 7? 8?... Well, what the heck! This is not the first time that I have come across interesting piece of information we were deprived of during school days. Information SO fascinating that it would have swell our pride [back then as a kid] and motivate us to do something as ground-breaking as Dr. Anandabai Gopal Joshi did. Just the kind of stuff Indian education SHOULD be providing instead of endless and gloomy chapters on our 'defeat' at the hands of invaders... You get the point, right!? [This for for hon. HRD minister] 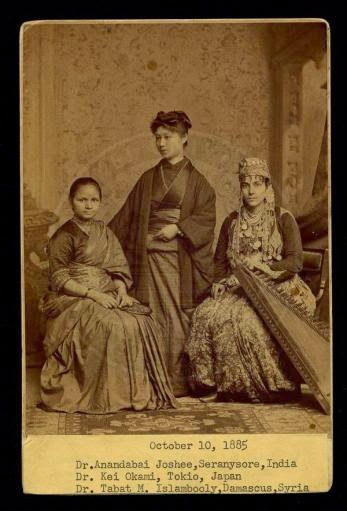 Okay, let's get to business. Have you ever heard that name? The one just mentioned in previous paragraph.. Well, she was the FIRST modern day Indian woman to set her foot on American soil ALONE AND to earn M.D. (Doctor of Medicine) degree in modern Western medicine. She was here before Swami Vivekanand! Think about that for a moment.

Daughter of Ganpat-rav Amruteshwar Joshi and Gangabai Joshi, born in Pune on March 31st, 1865, Yamuna or "Daughter of the Sun" was a LEGEND we never heard about. [at least I did not].
She was sixth of the ten children the couple had. Of her 4 brothers, 2 died before her. Of the 5 sisters, first and forth were dead.
Born in wealthy and high-caste Brahmin family, she was surrounded by the nobility of the times in and around Kalyan and Puna.


Her father is described by her cousin Ramabai[Another iconic Indian woman we have managed to forget] as "a rich landholder of Kalyan, a town to the North of Bombay, where he was warmly regarded by the high caste people". One of her mother's uncle was a distinguished Hindu physician in Puna.Yamuna grew up between Kalyan and Puna. She was from the first a great pet of her father, and her happiest hours were passed upon his knee, under a great plane-tree in the Kalyan garden, where he went to rest every day after dinner.


There is a very fascinating tale from her childhood when she was around five years old. Credit/praise makes me uncomfortable and have no desire for it, but after thorough search on Google, it is evident that no blog/site has ever reported this so far.

Once she had gone to bed as usual, at sometime before she was five years old, when there suddenly appeared to her the figure of a young and handsome man, dressed in a manner, and carrying weapons that she had never seen, in her dream.

"Who are you?" She said like any frightened child, when he fixes his eyes upon her.

"Do you not know who I am?" He said gravely.

"Go then to your father," resumed the soldier " and tell him to make you acquainted with my life, for it is you who are to tread in my footsteps."

At this she waked, bathed in perspiration and trembling. In the morning she went to her father and earnestly entreated him to tell her about the "God" whom she had seen. Ganpatrav was unable to identify the figure from Yamuna's description, but in the midst of many words, which she had forgotten, the soldier had said - "It is ungrateful to be ignorant of him whose blood flows in your veins"

From these words Ganpatrav felt certain that it was one of his own ancestors who had appeared to his daughter and he reverently opened his "Family Roll". Apparently, there was in her home an immense genealogical record of the Joshees. It stretched over 2000 years!!!! (YES 2000 years). Preserved by the head of the family in each generation and was illustrated by painted pictures of the costumes worn by its heroes and the events briefly described on it. It was written on a sacred paper kept expressly for such uses, from which no word could ever be effaced, emulating in this respect the tablets of the recording angel. As it was always kept under lock and key, Anandabai had never seen it, and knew nothing about it she had this dream.

Going through the "Roll" they came to a figure that Yamuna recognized at once as that of the man who had appeared to her. It was that of the young general who had founded the fortunes of her family, and in whose palace she had been born. From that time Gunputrav was even more tender toward his daughter. He not only gave her whatever she desired, but he paid special attention to her education.

When Yamuna was only five years old, she began learning Sankrut from a distant relative and a widower named Gopal Vinyak Joshee who was appointed a clerk in the Postal Department of Bombay in 1870. Yamuna remained under his care for nearly three years, when Gopal was promoted to be post-master at Alibag, with an increase of salary, arid at once prepared to leave the neighborhood. Yamuna’s grief could not be repressed. “I thought I should never learn any more,” she said; “and I would rather have died.”Forgetting her love for father and mother, indifferent to brothers and sisters, she begged permission to go away with Gopal. Her father was sorely puzzled. Although only eight years of age, Yamuna was now marriageable.

Gopalrav, was an ardent supporter of widow remarriage and women’s education. In fact, he married Yamuna on the condition that he would be allowed to educate her. She married Gopal Vinayak Joshee on March 31st, 1874 [on her birthday!] and she was now called Anandabai, or “Joy of my heart.” - by her husband. He was a very progressive man for his age and in an almost fatherly way encouraged his wife’s education.

I want to digress here for a moment and share very interesting note in her biography [ penned by Mrs. Caroline Healey Dall] for our pseudo-secular Indian friends, who ALWAYS speak ill of Hindu faith and it's practices.

There is nothing in the original Hindu scriptures to require the seclusion or subjection of women. The Hindus assert that this originated after the Mahometan conquest, in consequence of the licentious boldness of the Moslem soldiery.

Back on track, there is so much more to share, almost feel like I should recommend some film director about creating a biopic on her! But as the post is growing longer, will try to cut it short.

Anandabai’s and Gopal's only child was born in her fourteenth year, probably at Kolhapur, sometime early in 1878, as Gopal wrote from that town in 1878 and 1879. It lived ONLY about ten days, and died, as Anandabai thought, because it did not have a competent physician. It was this that led her to think of studying medicine. “A child’s death does no harm to its father,” she once said, “but its mother does not want it to die.”

We are now in fast forward mode and will be skipping lot of details.  With Gopal's exemplary support and after long struggle with family and relatives, she sailed from Calcutta for New York, April 7th, 1883, being the first unconverted high-caste Hindu woman to leave her country. Read that last line again. Does any word grab attention? Why word 'unconverted' is mentioned there? [ Does that suggest, there might have been Indian women prior to her who sailed to USA after conversion??]


So after losing their child, Gopal was supportive of her idea about medical education. Accounts suggest, he wrote a letter to one of the Presbyterian missionaries from Kolhapur on the 4th of September, 1878. Gopal expresses a warm interest in female education, and says that he should be glad to live in America if his wife could study there. It was forwarded to the “Missionary Review” published at Princeton, and printed in January,1879. Dr. Wilder, the editor of the “Review,” seems to have published these letters chiefly for the purpose of printing his own reply, written Oct. 14,1878. In this letter he thoroughly discourages Gopal’s project. He evidently does not wish any unconverted Hindu to come to America.

With the help of Mrs. Theodicia Carpenter, a lady almost as remarkable in philanthropy and spirituality as Anandabai herself, she landed in New York, June 4th, 1883. Anandabai began her medical education at age 19.  In America, her declining health worsened because of the cold weather and unfamiliar diet. She graduated from the Woman’s Medical College of Pennsylvania, March 11th, 1886, being the first Hindu woman to receive the degree of medicine in any country [outside Bharat] in modern history.

She was first to break so many barriers in days when even basic education for women was looked upon as an alien and bizarre thought by society at large. There are SO many interesting and [some gloomy as well ] details. I am listing a few below.

Whether you read her biography or not, you must read her application letter below  to WMCP. Out of the immense love for Gujarati [Didn't I mention that before!], I translated it to Gujarati as well. 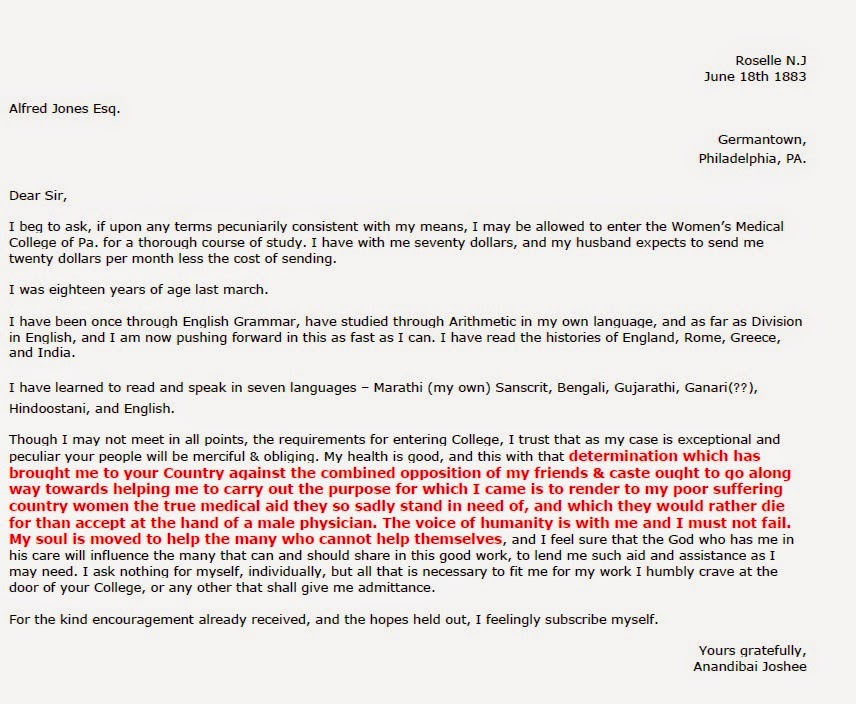 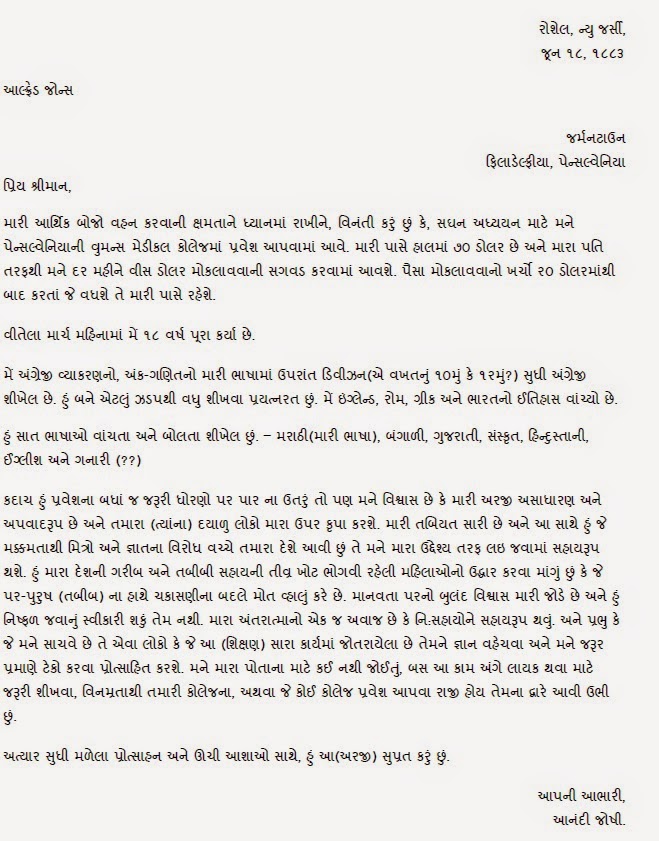 Not going in to the details of her last days as it's a saddening read, I will leave you with the below image that immortalizes this pioneering woman from our land. (31 March 1865 – 26 February 1887) 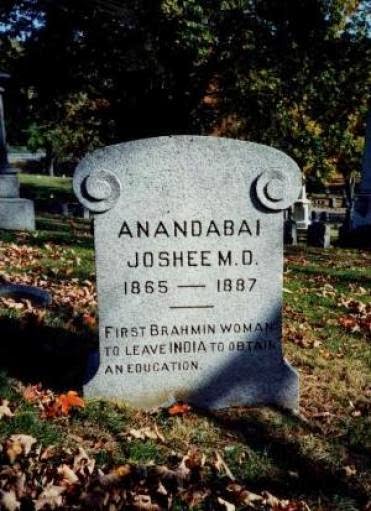 Finally the second goal/intention of writing this post. Dear Government of India, can you please consider starting a national level scholarship/fellowship in her name? It's TIME to get rid of endowments/hospitals/schools/awards/scholarships/schemes in the name of Gandhi's and Nehru's.
at October 29, 2014

Deshdaaz
An assertive and proud Hindu Nationalist from Bharat.

Those who cannot remember the past are condemned to repeat it.